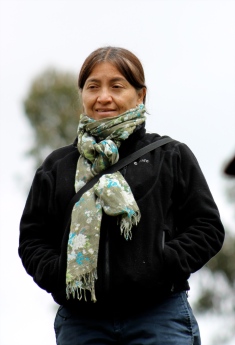 Ross Mary Borja is the Director of EkoRural. Before taking the helm at EkoRural, Ms. Borja served as the Program Monitoring and Evaluation (PME) Specialist for World Neighbors Andes program, where she developed a global PME system that was implemented in Ecuador and Peru. She holds a BA in Economics from the Universidad Catolica del Ecuador in Quito and a Masters of Professional Studies degree from Cornell University’s Community and Rural Development Program in the Rural Sociology Department. She has experience supporting Farmer Field Schools in the province of Carchi.

Pedro Oyarzun is a trained Agricultural Engineer with expertise is in agricultural production and crop physiology. He holds a doctorate in Plant Pathogen Ecology. Pedro has extensive experience working with the biology and diseases of potatoes. He has also developed, implemented, and maintained methodological initiatives about the farmers’ work. These initiatives were a type of Farmer Field School, with a participatory methodology. Pedro has been a regional consultant en Ecuador, Peru, and Bolivia in sustainable agriculture. 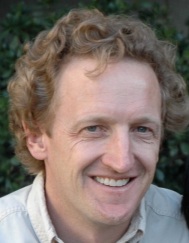 Stephen Sherwood and his wife, Myriam Paredes, own Urkuwayku, a family-run organic farm in Ecuador, where they are activists in national and regional rural people’s movements. Steve is also a Lecturer and Researcher in Knowledge, Technology and Innovation at Wageningen University, the Netherlands. Prior to joining Wageningen, Steve was the Andes Regional Director for World Neighbors. He has also held positions at Cornell University and the International Potato Center (CIP). He serves as an advisor to several private foundations and has helped to found a number of agroecology and grassroots organizations, including Ecuador’s Colectivo Agroecológico as well as the non-governmental agencies EkoRural, Groundswell International, and Peaks-over-Poverty. Drawing heavily on practice theory and feminist social perspective, he studies the social and institutional processes of change and becoming in households as well as in science and development. Steve’s present research focuses on the rising uncertainties associated with modernization in agriculture and food, including the onset and proliferation of overweight/obesity.

Mark Caulfield is a social and environmental scientist who has managed a broad-spectrum of Research and Development projects for the private, public and NGOs sectors since 2001. He holds a Master’s degree in Political and Social Sciences from Leuven University, Belgium and a Master’s degree in Environmental Management from the School of Oriental and African Studies, University of London, UK. He is currently leading a research project for EkoRural as part of a PhD at Wageningen University investigating the impacts of small-holder farm management systems on landscape ecosystem services in the Ecuadorian Tropical Andes funded by the McKnight Foundation’s Collaborative Crop Research Program. As part of this project he is using participatory action research methodologies alongside the latest hydrological and landscape modelling techniques to promote endogenous sustainable land and water resources management practices to enhance farm and farmer’s resilience 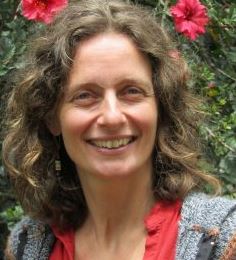 Janneke Bruil has over 15 years of experience in supporting international campaigns and networks, among others with Friends of the Earth International. With her expertise in process management and strategic communications, she joined EkoRural in 2016 to support the campaign of 250,000 families who eat well, healthy and locally, promoting agroecology and food sovereignty. Janneke, who has a masters in International Relations, also works with ILEIA, a learning centre for sustainable agriculture based in the Netherlands, and with the global Farming Matters magazine in which EkoRural regularly publishes its experiences. She finds that working with the EkoRural team and living in Ecuador is a rollercoaster ride, and a very rewarding experience for her and her family.

Martha Zurita is a technical engineer working for EkoRural as a business administrator. She enjoys strengthening EkoRural  with her expertise because it is the type of organization that allows her to develop skills in various fields.  She finds it very stimulating to work with a team that works on the frontlines of community organisation with such commitment. Her main goal is to further grow as a working professional and make a difference in everything that she does.

Wilma Llumiquinga G. is an administration technologist. Her career development has included accounting sciences, cultural and social programs, as well as programs in higher education and rural development. Wilma’s expertise in these themes has allowed her to meet and excel at various professional challenges. After six years, Wilma re-joined the team at Fundación EkoRural in the area of finance. She is committed to being productive, responsible, and supportive to all people she is directly and indirectly involved with in both social and institutional settings. One of Wilma’s hobbies is photography and she has even had some of her photos presented at various expositions. 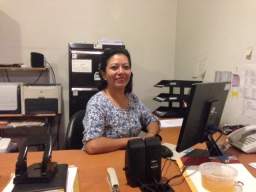 For many years, Miriam Gonzalez Kelz  directed a project called “Tejiendo Vidas” (Weaving Lives),  supported by EkoRural. She helped to create a sustainable market for the Cabuya fiber used in the production of artisanal goods in various communities in Cotopaxi province. She is the owner and manager of Natural Maqui,  and continues to provide a market for Cabuya fiber products produced by the communities that EkoRural works with. 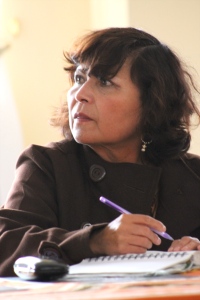 Sonia Zambrano is the Central Highlands Coordinator. She is trained as a nutritionist and specializes in participatory methodologies and people centered development such as, Farmer Field Schools, CIALs (Comité de Investigación Agricola Local) and Farmer-to-Farmer approaches. She has wide and varied experience and skills in development of community capacity. Before joining the EkoRural team Sonia gained relevant experience through her work in micro-finance. 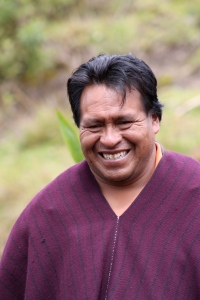 Francisco Lema is the Community Promoter of Chimborazo. He has close contact with the members of the communities since he himself grew-up in one of these communities in the central highlands of Chimborazo. Francisco speaks ‘Quichua’ the native language of the region. Besides his work with EkoRural, Francisco is also the president of  his community, Basquitay, and has been schooled as a traditional healer.

Elena Telelema is community educator of Chimborazo province. Elena grew up and lives with her family in Tzimbuto, a rural community in Licto, Chimborazo. She started her career as training promoter for woman with CESA (Central Ecuadoriana de Servicios Agrcolas), and as a health promoter in her own community. Elena also has experience in irrigation methods and works with the revaluation of agroecological products and the conservation and recovery of native seeds. In addition to the work she does with EkoRural, Elena is the president of the “Asociación Nueva Generación,” a community based organization for saving and credit systems. 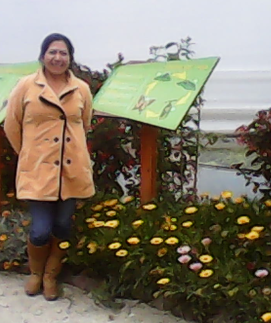 Guadalupe Padilla is an environmental engineer and has been working as a field technician for EkoRural since 2014. She works with women’s organizations in the parroquias of Mulalillo and Cusubamba in Cotopaxi province. What she likes most about her work is that she can teach and influence people to be more responsible with both native seeds and natural resources. Before joining EkoRural she was a leader in a women’s organization in her community, and also interned with the Department of the Environment for the GAD Municipality of the Canton of Salcedo. Her technical education was focused on social issues, gender, and the environment.

Silvia Maribel Guambo is from Chimborazo Province and was hired as part of EkoRural’s objectives to strengthen local capacity and form new, local leaders. She graduated from the Instituto San Gabriel and began working to support the research “Sustainable agricultural landscapes: the potential role of agroforestry”, led by Mark Caulfield. Silvia supports data collection on erosion, runoff and fertility experimental plots both in the lower and upper parts of the Naubug community near Riobamba. Her work consists in taking samples of soil moisture, measuring soil erosion, incorporating organic matter, and planting and harvesting in the experimental plots to compare them with agroforestry systems and the control plots.

Chloé Xavier (2017) has an MPH in Epidemiology and is a recent graduate from the University of Toronto, in Canada. She interned at Ekorural for two months (February and March 2017) assisting in the IDRC grant project on responsible consumption and non-communicable diseases in Ecuador. Her work consisted of helping with statistical analyses, providing epidemiologic expertise, and helping develop the foodsheds of Quito, Riobamba and Ibarra.

Simon Estival (2017) is an agricultural engineer and a recent graduate of the National School of Agronomy of Toulouse, in France. He interned with EkoRural from January through March of 2017, focusing on agrobiodiversity of potatoes and corn within the central highlands of Ecuador. Simon collaborated with EkoRural’s Central Highlands team including Elena, Guadalupe, Francisco, and Sonia on a study within the indigenous and mestiza communities in this area. The study consisted of household surveys to determine the seed varieties of potatoes and corn in production, and how the agrobiodiversity of the chakras (family farming plots) has changed since the last survey on this topic in 2008. This study raised awareness of the issue of agrobiodiversity loss within these communities.

eely McCaskie (2013-2014) worked with EkoRural by way of a 10-month Fulbright grant. She served as the Northern Highlands Coordinator and worked with local actors in the provinces of Imbabura and Carchi to strengthen local knowledge, capacities, and livelihoods surrounding healthy and sustainable food systems. Keely specializes in the facilitation of participatory, intercultural, and justice-based learning around a wide range of social and environmental issues.

Pauline Beaudet (2014) completed a “Development and Expertise of Social and Solidary Economics” Masters with the University of Political Sciences of Grenoble, France. She interned with EkoRural for 4 months (April – July in 2014) where she developed a stakeholder map in the city of Riobamba with Francesca Nardelli, and, with Brooke Estes, she carried out pilot projects to strengthen the relationship between producers and consumers in Riobamba.

Brooke Estes (2014) completed her Master’s Degree in Development Practice at Emory University in Atlanta, GA.  She interned with EkoRural for 10 weeks from May through July of 2014 and worked with Pauline Beaudet on a second phase of stakeholder mapping in Riobamba and developed pilot projects to better link local producers and consumers.

Vani Murthy (2014) completed her Master’s degree in Public Health with the University of Michigan where she also plans to pursue her Registered Dietitians License. From June-August 2014 she interned with EkoRural’s Riobamba office where, with the staff nutritionist, Sonia Zambrano, she developed participatory assessment methods to record and discuss the dietary habits of local producers in Tzimbuto.

Jonas Wegener (2014) studied International Development Studies at Wageningen University in The Netherlands. As part of his Master thesis he conducted a research on fluidity in agriculture in the Central Highland of Ecuador. During his time in Ecuador he lived with several farmer families during a period of three months. EkoRural supported him with its network.

Ingrid Flink (2012) was an intern with EkoRural while pursuing a Master’s Degree from Wagenigen University in Holland. She worked in communications with the national campaign, ¡Qué Rico Es!.

ucted her fieldwork with EkoRural and Groundswell International and working primarily in Communications and Development. She has her Master’s in Development Practice from Emory University.

Coco Sips (2012-2013) was an intern with EkoRural. She has now completed her Bachelor’s in Regional Development and Innovation from van Hall Larenstein, part of Wageningen University in Holland. She worked on various initiatives and helped keep the website up-dated by documenting experiences in the field, like short movies, photos and reports.

EKORURAL IS A MEMBER OF: 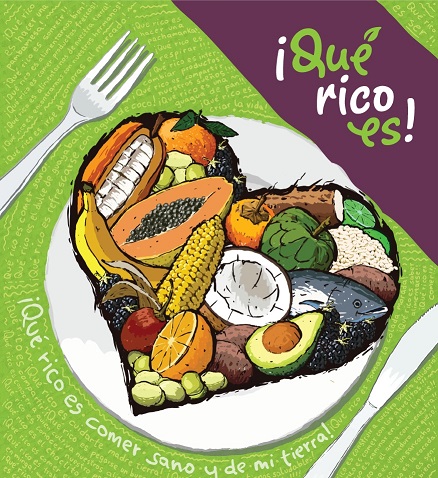